I know I am going overboard. But this place is something I simply love. It looks like yesterday but it was ten years before I severed any connection with my hometown and landed in Chennai. I was greeted with thunderstorm and knee deep water as my brother took me to his stay in Madipakkam. The water didn’t recede for four days and it was not a good first impression.

Then we had to move to a place called Senthilnagar near Avadi. It was nightmare of worst sort. There was no way we could access the actual Chennai. We had to take a train and then a bus to atleast reach the outskirts of Chennai. Coupled with the exhaustion and small companies which didnt pay for my work, that place is just a bad memory for me.

We came to Korattur in 2007. Life had changed at the blink of an eye. I got a job which I loved and importantly it paid. We were in a locality which actually gave the much needed peace of mind. Mainly it was the shady roads and water bodies close to the streets which made a pleasant evening walk possible. The main road leading to Padi Flyover is populated with thick and old trees so much so that canopy only renders the sky partially visible. The road was nightmare in 2008, but after a tragic accident of a politician’s son, the roads were relaid and now it is a breeze to travel in that road. We used to joke that whenever our corporation people had some free time they will start laying roads here.

The streets are numbered to perfection, it would be very easy for an outsider to find an address in Korattur. The well planned colonies lets people park easily without any problem and also gives enough space for the children to play.

Last year when I had to frequent hospital, there was heavy rains. I was in hospital in Anna Nagar where the roads were flooded. Thankfully one Taxi driver picked us up and we swam through the chaos. When we turned right from the Padi Flyover my dad said “We have come to our area. There will be no problem from now on”.

The streets are newly laid once in a year and the streets are numbered. You can easily find your way around Korattur. This is one of the cool places where you have bus stand close to train station. So if you miss a bus or train, the other option is very close. I have never seen people who had spent some time in Korattur leave soon. It gives easy access to the city’s hustle and bustle at the same time had preserved its old world charm.

Come over once, you will not be disappointed. 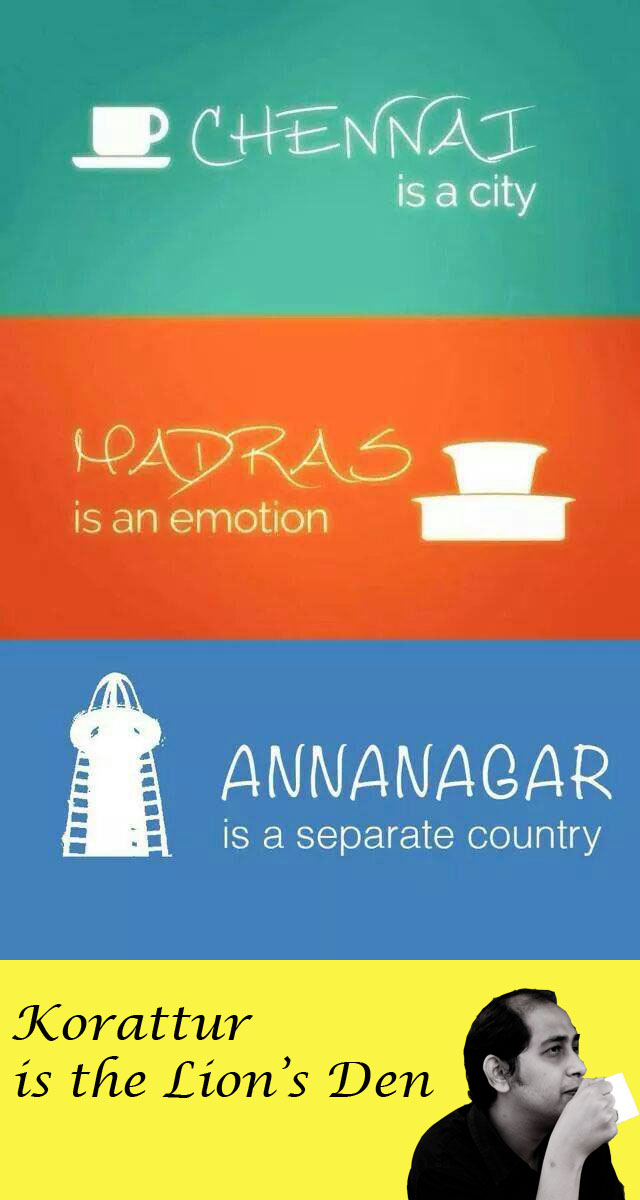 Good one ! Good to know about your area. I believe cost of living is also affordable in korattur.